Uranus the Awakener Does An Olympian Back Flip

Uranus, the planet which astrologers say symbolises maverick behaviors, upside downs and inside outs, turnarounds and strange backflips, actually ‘does one’ and appears to go backwards in the sky. Uranus is in the sign of Aries that wants to go forward. 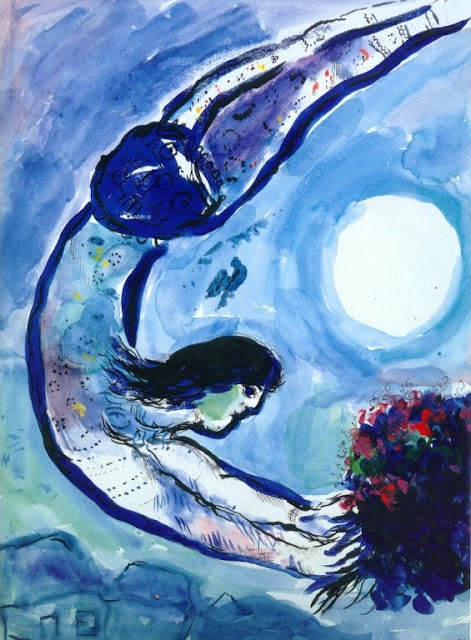 From the 13th of July 2012 Uranus will go 'Retrograde' and will continue in this vein until 13th December 2012.
Uranus is certainly not the only planet to do this, they all get their turn, see posts on Venus, Retro Review, Saturn, Chiron 1 & Chiron 2 and Mercury. Uranus entered Aries initially in May 2010 briefly going back into Pisces in August of the same year, before finally settling into Aries in March 2011 taking with it the seeds of change and discontent stirred up in Pisces. There was an oil crisis exacerbated by revolutions in the Middle East, the banking crisis having a domino effect and jump starting a continuing global crisis. 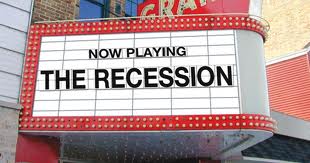 What is going on when Uranus goes back on itself, what can we expect from this planet which already symbolises the unexpected? 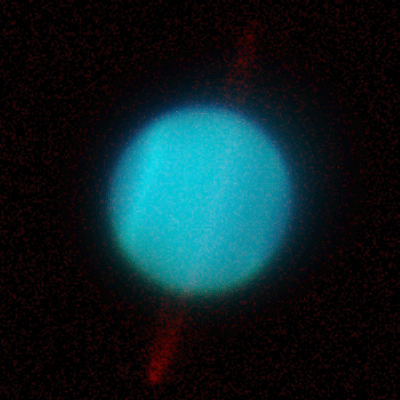 Uranus has been called 'The Awakener', as its arrival or departure can signal a time of shocks and jolts. These 'bolts from the blue' can serve to illuminate, like a flash of lightning, what exactly needs changing. Uranus has a reputation for upsetting the status quo and for being pretty wilful, quite pig headed and in fact downright perverse. 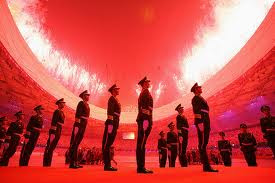 Aries atmospheres can also include a meeting of C.E.O’s, a hot desert, a pioneering fleet or singular craft setting off probably into some unknown. Aries arenas also include the sports field. Aries could simply be an adrenaline junkie’s haven.
Then, along comes Uranus through this territory, blasting its lightening bolts and rattling the cages, even sticking out its tongue and throwing a few rude signs at the Establishment and what is established. This Rabble Rouser, this fly in the ointment, this 'flipping the bird' has just started it's journey through Aries territory and is already making its presence felt in those specialist Aries fields. 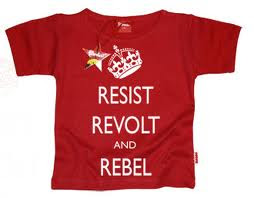 Aries rules the head and Uranus presence here has already brought its own massive headache to heads of state (Egypt, countries in the Eurozone) and to heads of business (Barclays Bank). Heads have gone and will continue to roll. 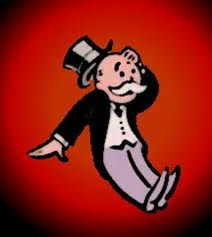 Aries is highly competitive and loves to move muscle, tighten sinew and revels in getting the blood pumping. During this Uranus Retrograde in Aries sporting men and women, whether participating or spectating, are gearing up for the London Olympics. At the same this has necessitated an increase in military anti-terrorist measures and is a palpable presence in the city and throughout the whole country. As Uranus travels through Aries it also pulses out an electric charge and brings fresh new life, fresh new energy and excitement. Things that already bring a challenge and competition are currently getting a further adrenaline shot. 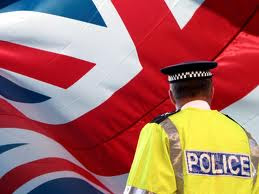 From the 13th July 2012 then, from our perspective here on Earth, Uranus will appear in the sky to go backwards or to go into reverse gear. Just as it seemed to get started in this new phase it is now going back on itself. Odd already, Uranus is appearing to go backwards in Aries which is possibly the sign that is completely hard wired to move forwards. Potentially this is not the most comfortable combination. The last time Uranus was in Aries the world economy collapsed due to out of control speculation in the stock market and the bubble bursting in 1928. This period of time became known as 'the Great Depression' and witnessed unemployment on a enormous devastating scale. It also saw evidence of greed and get rich quick schemes showing no concern for the resultant mismanaged calamities. Sound familiar? 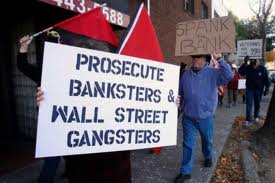 The six months duration of Uranus Retrograde will not be the most comfortable of times.
Let's see what we can do here - it does give us all more time to reflect on the changes that we have recently implemented. Rather like before we move any further along we must take stock and check whether or not the path we have chosen is in fact the right one or at the very least, in keeping with what we want to achieve. We may need some wiggles and jiggles, some pinches and tweaks, time to sort out what could do with a nip n' tuck.
Just as we have been surging forward, hopefully, high on our own supply we will turn round and wonder hmm...We will start to question and reconsider. 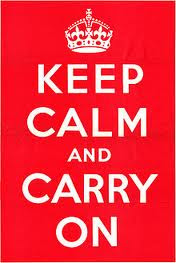 Look to your chart, the Aries zone is the one where the upsets and hiccups may come from but rather than scowling and frowning at the turbulence see it as a wake up call to test whether you are in alignment and haven't run away with yourself.
Our newly found head of steam may fizzle out a bit, but it will still crackle and pop - As will those planets in the early degrees of Aries, Cancer, Capricorn or Libra.
Most notably I think it will be felt acutely by those of us with planets or angles in the middle degrees of those Cardinal signs, because they will have been feeling the anticipation of the actual arrival of Uranus. These degrees bought their season tickets for the train expecting BIG changes on their journeys. They have been subtly sensing it's arrival on this track hearing the whistle blow and been quivering with excitement on the platform as they contemplate the adventures ahead. You may be anticipating an exciting job prospect if you have MC in mid-degree Aries, or the sweet thrill of a new romance with Venus in mid-degree Aries or the home of our dreams if Aries is in a mid-degree at our IC. This adventure had begun in all our psyches and we imagined it getting closer, nearer.........only to disappear or appear to disappear!
Remember, come December of this year the Uranus train will begin it's forward momentum again, picking up passengers along the way, passengers it appeared to have dropped off earlier. 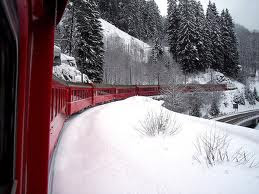 In 1781 William Herschel in his garden in Bath, Somerset initially tracked Uranus as a comet but had in fact recorded a major planet in our Solar System -  the first to be found in modern times and has led to further innovation and discovery. Uranus has only been visited once in our history of space exploration when it was passed by the space probe Voyager 2 in 1986. Already spinning on its side Uranus has since changed its stats to 13 known rings and possibly over 27 moons! It is a planet still full of surprises. 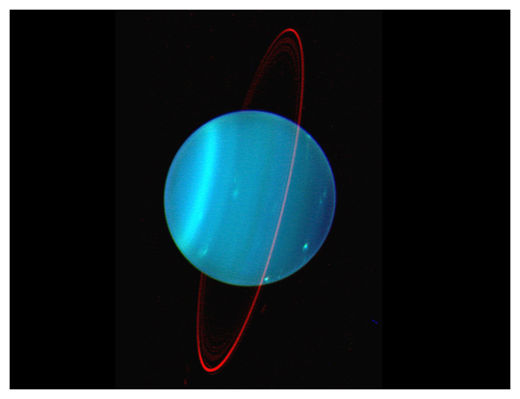 With an orbit of 84 years Uranus spends about seven years in each sign so we have now got a new cycle for growth and invention with Uranus in Aries. Just as we get used to going forward, thrusting and urgent in our efforts to initiate plans and change things, suddenly we appear to be strangely thwarted by this Uranian backtrack. Obviously we would do well to be very creative and reconfigure some of our more unrealistic plans. Perhaps the energy that may have been used rushing around chasing will o' the wisps can be re-used and re-cycled elsewhere.
The real point is whatever we astrologers say Uranus is about the most unexpected planet there is and so by its very nature UNPREDICTABLE! Perhaps that can be re-invented. Let's surprise ourselves and let some of our more original ideas 'take off'. 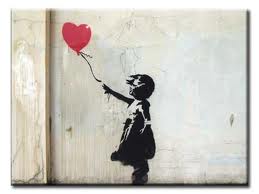 Well, I have told myself 'good luck working that one out', as Uranus does a backflip with fireworks in hand whilst singing the Hallelujah Chorus......or is that in store for me?...... (NB dont try this at home and no this is not an Olympic event just yet) 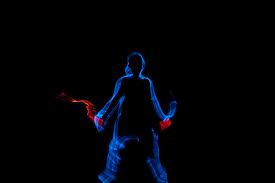 Within this retrograde period Uranus the Awakener will want you to 'be aware' and 'wake up' to the ideas you have been germinating but be awake to what might need revision and attention. Aries wants you to 'just do something' but  we will all have to remember the lessons of the past and try harder this time around to make it good........
posted by pippa ponton & jphibbs

Posted by astrology wheel at 12:42

Email ThisBlogThis!Share to TwitterShare to FacebookShare to Pinterest
Labels: uranus