Sun In Taurus - Tending To Our Gardens

On the 19th April 2013 the Sun traveller moved country, as it does every month, this time it meanders leisurely but purposefully into the Taurus Earth Landscape until the 20th May 2013. It feels good to taste the fruits, sip the fresh water, listen to the songbirds, smell the freshly cut grass and secure our feet firmly and deeply into the earth and feel secure even in the hard work.
Now we can stretch into our bodies, fill and expand out into our personal landscape and reach for the ripe juicy goals just in front of our noses. Our purpose, symbolised by the Sun, during Taurus the Bull time, will be so tangible we can practically smell it, so close we can nearly hear its whispers, and so tantalizing we can almost believe it is there, already in our hands. We are so convinced we are ‘there’ in fact that we tell ourselves we deserve a break, no matter what else is going on or how high our expectations are.

Irish Celebrity Gardner Diarmuid Gavin has Sun in Taurus
‘F**k It’ we say, pour a glass of something, lay a blanket on the ground and just simply
R-E-L-A-X………
Hang on though, this is all very fine and dandy if your garden is fully in natural flow, doesn’t need pruning or sowing, the grass doesn’t need mowing and the dead leaves blow themselves away. Great if your goals are accomplished or new goals set or scored.
'Skol', cheers, prost!, yamas, a votre sante, you say…..however……there is also the very real possibility that some of us may still have some way to go before we are all brimming over with the goodies. If that is the case then, well then it is time to exercise the full muscular power of the Bull and put your shoulder to the plough and your back into it. In other words this month it is time to ‘Get Your Hands Dirty’ and get stuck into your various tasks, its a winning formula.
This Taurus ground that the Sun, our purpose, finds itself in is extremely favourable to our efforts to direct our energies into getting exactly what we want. The operative word being 'exactly'. As any gardener will tell you, sow an acorn and get an oak, don’t expect a bamboo to sprout instead from that intention. Taurus loves it obvious, Taurus loves it literal and it loves it smack bang in front of its face no matter how messy, just as long as it is real. It knows how to tend, it knows how to get the best out of any situation or person, just as long as it has something to nurture, cherish, love and develop. Many writers and literature greats were born with Sun in Taurus and as many writers tell us in order to write we have to turn up everyday. Then we can slowly develop your ideas, find the exact words and work hard at it. There is a shift to the tangible, the sensual and the physical with Taurus, as we are prone to prolonging our pleasures for as long as possible. No, nothing hurried or harried here, we want to take our time with those things we enjoy and why not. We really do want to Savour the Flavour but for some there may well be a lingering bitter taste in the mouth.

Queen of England, Head of the Commonwealth & Head of the Church of England  Elizabeth II has Sun in Taurus
The 87 year old dressed in full Royal regalia, wearing the heavy 3,000 gem, Imperial State Crown and 18 foot Robe of State for the opening of Parliament in the UK ,8th May 2013 and the delivery of the Queen's Speech. The speech is not written as 'her own words' but facilitates the introduced of 20 new bills from the unpopular UK Coalition Conservative/Lib-Dem Government. The Queen was joined by her son Prince Charles who will take on some of her State responsibilities as she begins to cut back her royal duties. The Queen Speaks Taurus
Steady Taurus energy can be most welcome for some of us after the all the rushing around and perfectionism of the Sun traveller’s environment in Aries, last month. Now we simply can choose to adopt a more tolerant and kindly eye upon what is in front of us. Our senses can also become more keenly attuned. Beauty will always hold a deep fascination and not always in the 'eye of the beholder'. Big Bull eyes might not stop at just beholding a well laid table but also savouring rather more than the belly can normally hold.
As we all journey with the Sun, we will all move with Taurus and it’s graceful, sensual yet powerful push forward. The Taurus symbol is of the Bull and the Cow. Both of these animals are deeply revered in many countries. Spain has a culture that is inseparable from the active yang masculinity of the Bull. Whilst Mother India worships and holds 'holy' the passive yin feminine sacred Cow. Deep in our cultural mythologies these animals have been both object and subjects of desires and glorification through the ages, the Minoan Culture of Crete, for example.
Also qualities of the Bull and Cow, such as stubbornness, perseverance and reliability have been attached to those born with Sun in Taurus, and many Taurus Sun's will identify with the possession of such traits. This is only part of the story, they are people to whom much is projected onto them from others, and they can get so fixed in these pictures they can forget what it was that called to them in the first place. Sun in Taurus can get frozen in time and place, caught in a time lapse, trapped in zones of inertia and this is all because it can just be fulfilling other people's fantasies about them and there they are derailed or stuck! In order to help yourself get unstuck this month, when you become seduced by the all pervasive Taurus mood so apply the Taurus balm of determination to build your vision.

Millionaire toy developer, manufacturer & Conservative MP Frank Hornby has Sun in Taurus.
His brand names like Meccano, Hornby Trains & Dinky Cars, obviously only meant for 'BOYS' constructed and peopled childhood worlds and imaginations all around the world.
Artist Liam Curtin used the Meccano principle of scaling down engineering by scaling it up 10 times to design a useful 'work of Art' for Manchester, the Bolton & Bury Canal Bridge, replacing the old horse bridge at Nob End, Little Lever, Bolton (no, I have not made up any of these names) It was constructed largely by volunteers from the local community. 'Building a bridge from giant Meccano is the fulfilment of a childhood dream. I spent my entire childhood building mechanical devices from Meccano and now we have the largest Meccano style set in the world.'
Keep on exploring what is truly you and yours and what is not and has been 'put onto you', passed along, mis-labelled or inherited. De-clutter in wardrobe, mind, body and expectations and also remember to maintain some momentum but also that Taurus know only one speed - its own. Sun Spotlights Hoarding
These are normally Taurus secrets because they generally have sugar-sweet natures and the one speed they know – their own. Taurus is a combination of practicality and poetry, a mixture of earth knowledge and sky expanse. You may never quite know when a Taurus at any given time is the gazing, grazing Cow, the full steam ahead charging Bull or a panicked herd.
Welcome to Taurus Landscaped Garden which is where we and the Sun traveller find ourselves. All these issues and behaviours will be all around us, like it or not or whether we have time to ponder, debate an answer, evade or try to avoid them, at some level we will meet them face to face for good or bad and sometimes we have to face that not everything in the garden is lovely.

So what can we expect as Taurus energy pours down to us through the Sun’s rays? After all we will be affected whether we are indoors, outdoors, sleeping or waking, we will be saturated in its radical and far-reaching power. We can expect to be more practical and hands on, more focused on our bodies, more attuned to beauty and harmony in all its forms. We will want to have it easy and also quiet prepared to do what it takes to get there, even with the detours through feeding pastures and watering-holes. Remember we are all on Taurus time which is all about our own sweet time but have we got the time.
The zone's presided over by Taurus in our lives will start to undergo their annual gaze ‘n graze. If you have planets ‘tuned in’ to receive Taurus energy then they will sense shift, if you are Venus in Taurus the way you relate and how you receive love and money will get a boost. If you have Mars here, the way you marshal your troops to attack or defend will come to the ascendancy. You may well be called up to put your ideas into practice, to get involved in community or social gatherings, to hang out and enjoy other peoples company, Taurus is a herd animal after all and relishes in the company of others in real time, in cyber space or both. 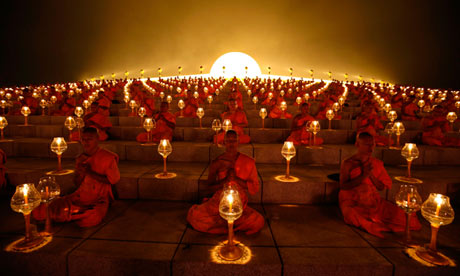 The Buddha is often associated with Taurus energy. To fully taste and partake in the Now, actualise who you are in present time, delight in your breath as it comes in and goes out and draw on the reserves of power nestling in your body, your own garden and in your heart and mind under your own Bodhi tree.
The Sun in Taurus time, the end of April beginning of May is about the grounding of ideas, living in the present, just being, not necessarily just doing but wherever we are enjoying Mother Nature.