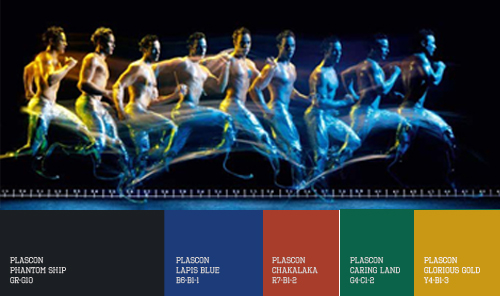 The focus here is on the ever rising stars of the 2012 London Paralympics sporting world.
Dubbed the ‘Super Humans’ these are all inspiring people with incredible stories. 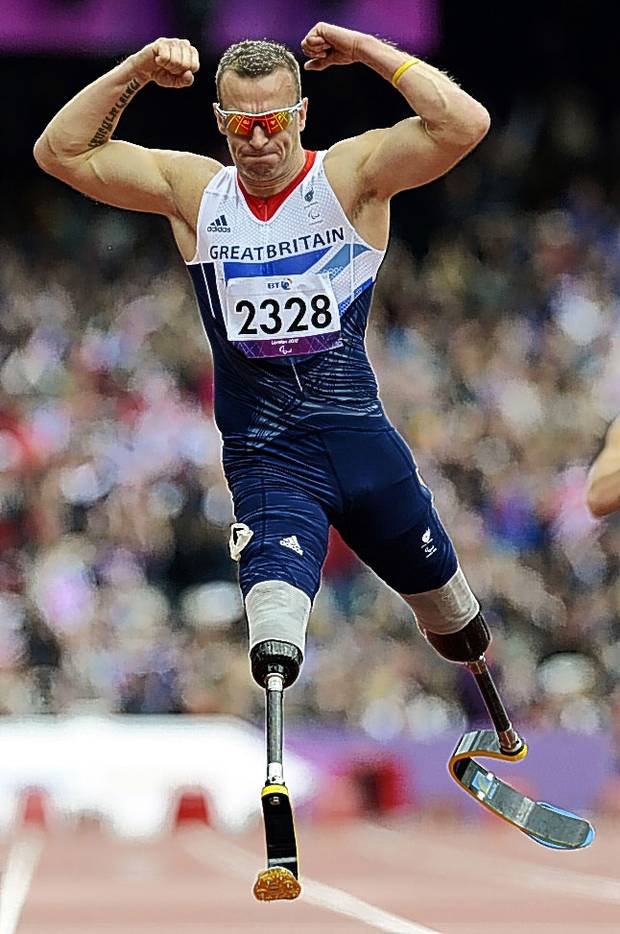 Richard Whitehead is a Blade Runner. He is a British athlete who runs with fixed prosthetic legs made of carbon fibre called blades which enables him to run as he was born with a double above knee congenital amputation. Loving sports he participated in swimming and gymnastics and took up ice sledge hockey, representing Great Britain in the 2006 Winter Paralympics. He then decided to run the New York marathon in 2004 before running a single mile  'I had no competitive running experience at all because up until then, the technology for prosthetic legs was very expensive... I was inspired by Terry Fox..a single legged amputee.. with cancer. After losing his limb Terry attempted to run from East to West of Canada.  His strength and determination was inspiration and showed that with a big heart and the will to succeed, you can overcome barriers put in front of you.'
On the 1st September 2012 Richard entered the 200m final in the Paralympics with a headache and running a temperature. Despite all that he ran the race of his life. He run took him from 5th place to 1st and he ecstatically claimed his Gold medal. 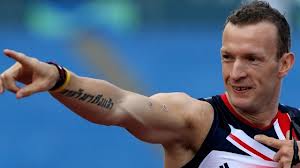 Whitehead has a tattoo stating ‘Cometh the hour Cometh the Man’ and cometh he did as his awesome race meant he not only won but also broke the 200m world record. Richard evidences admirable mountains of determination, courage and drive, from being told as a school boy he could not join in the sports lessons due to his disability, to being told by the International Paralympic Committee that he could not run in the London Paralympic Marathon due to classification alterations. The marathon was the race he had trained so hard for, set his sights on and which he loved. In Rome 2009 he was the first ever leg amputee to break the 3-hour barrier for the marathon. His website is called 'marathon champ'. His switch from marathon running to sprinting, in one year was no mean feat.

'I am living proof, that with enough desire and determination, any obstacle can be overcome.

He remarked, like a triumphant Caesar at the Coliseum, 'I came, I saw, I conquered'

Looking at Richard’s chart there are 3 main groupings: - A Fixed Grand T-square of Mercury, Venus, Saturn, Uranus the nodes and Chiron. Pluto is brought in to this aspect structure through its sextile aspect to the stellium in Leo.

- A Mutable square of Mars and Neptune

- A Sextile of Sun and Jupiter
Undoubtedly the Fixed T-square involving 6 planets and the nodal axis, is the KEY cluster in his chart. Essentially it involves a stellium in Leo consisting of Mercury, Venus and Saturn, which forms a square to both Uranus and the nodes in Scorpio, and Chiron in Taurus. Fixed T-squares such as this are hard wired to overcome and gain mastery. Their stubborn fixity and fixed purpose is constantly tested. They will have to pit their will against obstacles and keep their desire strong in order to persevere and prevail. Stamina and endurance is also a feature of the nature of this fixed structure. 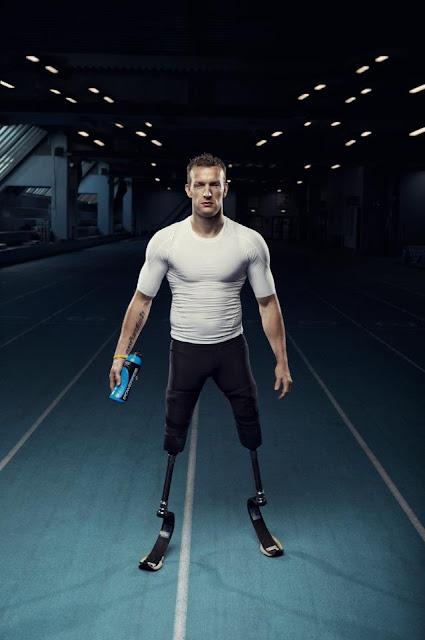 Richards’s life certainly shows these traits strongly. These Leo planets are given a lift somewhat and a way out of the fixed behaviour patterns which can become troublesome if left to their own devices by Pluto in Libra making a sextile with them. Sextile aspects are a helping hand, we have been given a chance and some opportunities to explore change, adapt and learn here, if we choose. One of the major spokesmen in his birth chart gathering is the Saturn Pluto combination. This speaks of invincibility, survival and an almost ruthless, relentless energy. The opposition portion of this aspect structure is between Uranus and Chiron, a tense and electrifying shaft of energy connecting The Awakener with The Wounded Healer. 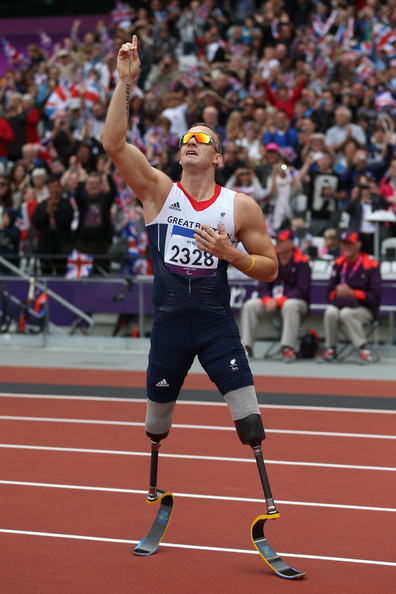 There is no underestimating the importance of Chiron and the Paralympics Super Humans Show Of Strength - The Paralympics. Melanie Reinhart writes in ‘Chiron and the Healing Journey’ about the combination of Uranus with Chiron that it ‘heightens desire for freedom from constraints’ and that it has an ‘urgent need to make a mark’ suffering with problems with authority and ‘may be unstoppable and go to extremes trying to break through previous limits’. This Uranus flavour is also joined by the nodal axis, representing Richard's ‘destiny’ or soul’s purpose. This ‘complex’ was triggered or ‘hit off’ during the London Paralympics, and the receiving planet is Richard's Pluto at 9 degrees of Libra. His Pluto was effectively caught in the current eye of the Cardinal storm between Uranus and Pluto Uranus vs Pluto. 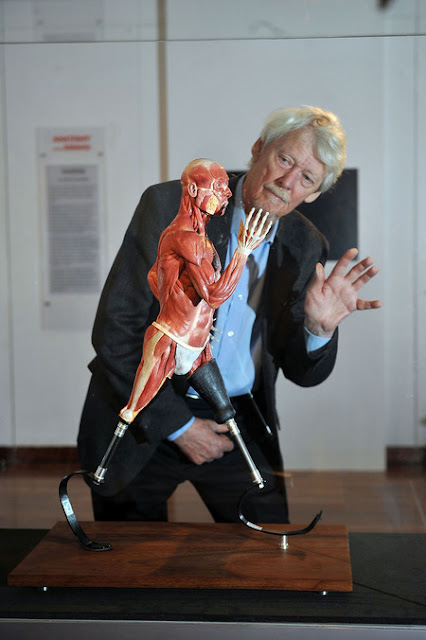 The sextile between Richards Sun in Cancer and Jupiter in Taurus is a helpful and expansive, positive, upbeat surge of engery. It fills him with faith, self confidence, self assurance and a sense of humour. As a sextile, it is energy there available for him to use should he choose, and it would seem that he has chosen in large doses to avail himself of its optimistic ‘always look on the bright side of life’ philosophy.  Sure enough this sextile was getting a boost from the planets during his race in the form of a conjunction (holding hands) with Venus. Venus can bestow popularity and artistry, and combined with Jupitar adds a real sweetness, and it is not a stretch to imagine how ‘sweet’ the smell and taste of success felt to Richard on that night. Saturn, the teacher, the disciplinarian the master of grit grin and triumph was also aspecting the Sun side of this sextile. This would have given a measure of restraint and self discipline – the Venus-Jupiter could have just partied without having done what it takes to get the reward but Saturn made sure Richard did what he had to do to receive his just desserts. 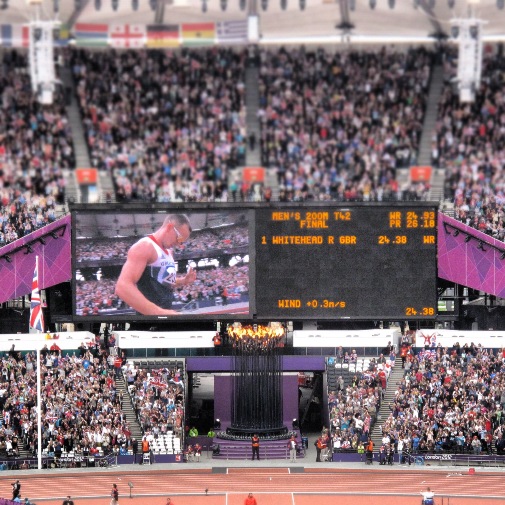 Finally the Mars in Virgo square Neptune in Sagittarius. Mars planet of energy, muscle, sinew, competition and challenge is square Neptune. Neptune on Mars has a reputation of ‘weakening’ or dampening down its ardour, not the sort of combination needed for an elite athlete, and certainly being born with the congenital problems with his legs did not bode well initially for a career in athletics. However Mars functions well with physical activity and thrills in the chase. Mars is born to conquer. Overcoming the obvious obstacles, using and pushing his body, allowing a channel for his Martian frustrations seems to have worked really well for Richard. On the day of the race this Mars-Neptune was activated by – Mars itself! Mars was perfectly aligned in a conjunction (holding hands) with his Mars, setting his inbuilt desire to win aflame. His Neptune is in Sagittarius, the sign which stretchs boundaries, the sign of the visionary, the dreamer, the ‘imagine-what-if’ – Living the Dream? Yeah no problem…
The South Africian Oscar Pistorius is a pioneer of prosthetics runner and the sports most well known superstar, know as 'the Blade Runner' - the fastest thing on no legs. 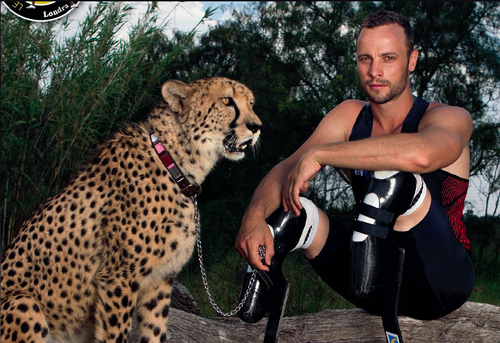 He is one of the few Paralympic athletes who also competing in the Olympics. He had to fight an appeal in order to compete at the 2008 Beijing Olympics. Born with a congenital absence of the fibula in both legs, Oscar had both legs amputated when he was 11 months old. 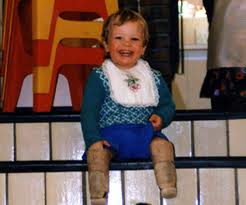 Since taking up running on the prosthetic legs, ‘blades’, controversy has followed him around, as his ground-breaking strides hits the headlines and the opposition in many forms. The London 2012 Olympic and Paralympic Games was no exception. Whilst running in the able bodied sprint in the 200m Olympics old rumblings and complaints simmered and questions were asked as to whether his blades gave him ‘an unfair advantage’. In the Paralympic 200m it was Oscar himself who ignited the fire by questioning the Brazilian surprise winner of the race, Alan Olivera, as to whether his blades were ‘legal’ and fair. 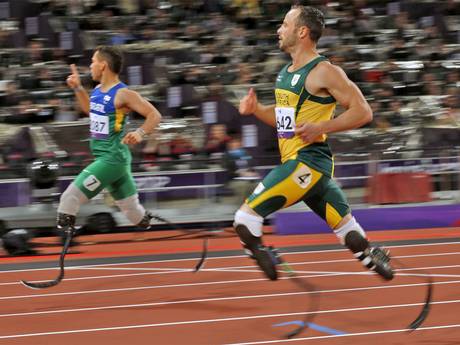 One way or another Oscar’s ‘form’ has and is challenging perceptions, asking questions and taking the debate to new levels, transforming how we all think and judge those who look ‘different’, or who have what is termed a disability. 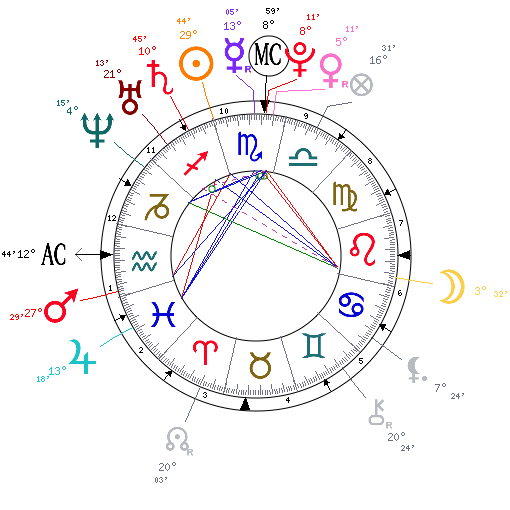 I won’t go too much into the timed information since it is unconfirmed, but I will briefly talk about the Rising Sign, which with this time, is Aquarius. The Rising sign or Ascendant, can often give a description of how a person ‘arrives’, how they appear, what they look like, and what ‘face’ or front they present – in other words a persons ‘first impression’. Aquarius on the rise for Oscar does seem to fit well, think of Aquarius and words such as startling, different, unique, ahead of their time, controversial and challenging all spring to mind. Those of you born with Aquarius Rising want to fit in somehow but find the task harder than anticipated, and if the truth be known, if you ever did succeed you would want to shake it up and be the outsider again! 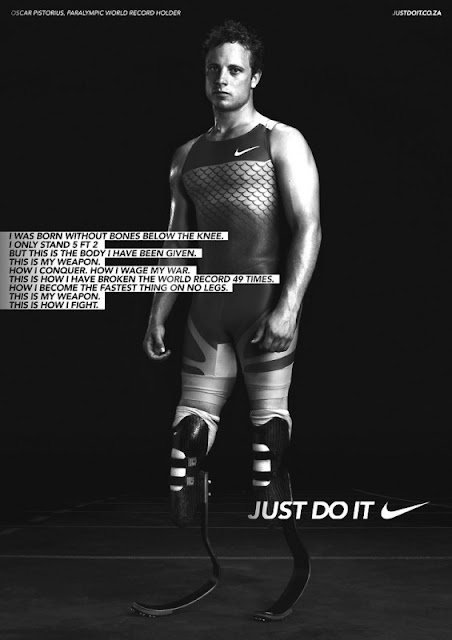 Astrologers will also consider many other factors, including the Ruler of the Rising sign. They would check to see how it is doing, they would look at its condition so as to give more clues and information as to how a person’s Ascendant presents itself. For Oscar this would be Uranus, and this is in the international sign of Sagittarius. Sagittarius drives ever forward hunting down the edge of the boundaries so that it can joyfully cross them. For Oscar, it is also forming an opposition to Chiron, the Wounded Healer, exactly the same aspect as Richard Whitehead.
This time of birth stated as 10.30 am also gives him a Scorpio Midheaven (MC), and this point in a chart is often looked at to give us information about our vocation, profession, status and reputation. This area for Oscar is packed full of other goodies, since he has a collection of three planets around the MC. He has Venus, showing his values and what he desires, Pluto showing his force and transformative power, and Mercury, showing adaptability, 'fleet of foot' and communication. 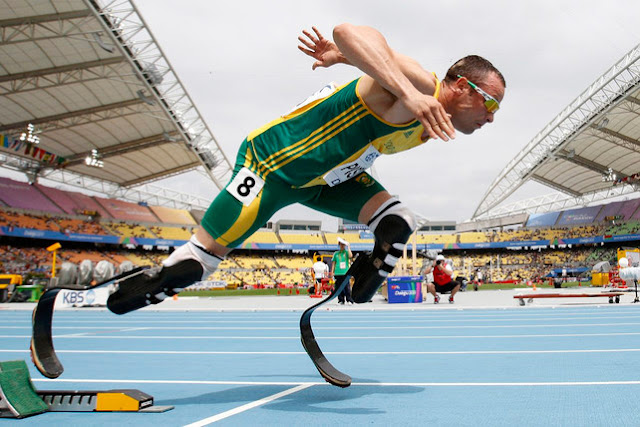 All in the fixed sign of the Scorpion, Mars in Scorpio - What Lies Beneath Scorpio energy being highly activated at the moment with the current nodal axis as well Axis Of Power & Possessions - Scorpio/Taurus .This is a highly complicated 'complex' and key motivator in Oscar's chart. All this powerful, versatile transformative energy can be channeled through ‘how the world sees him', through his reputation - the MC. 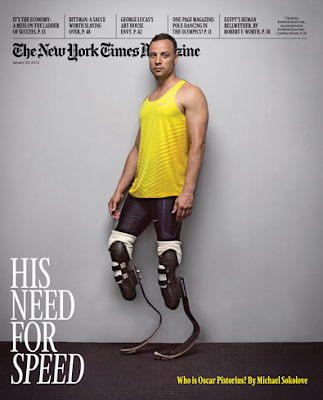 During the Paralympics when he won a gold medal as the anchor runner in the 200m relay, Mars in Scorpio was exactly conjunct, holding hands with, this Scorpionic stellium. In other words the whole kit and caboodle was kicked into dynamic action.
Oscar Pistorius started as the most well known athlete track star at the Paralympics and one of the most famous sports stars in the world. He has also been vocal about technology developments and the resulting classification the Paralympic movement will have to address after a newly raised profile and this giant step forward for the movement in London. Fittingly he won the 400 metres, the last race run in the stadium. 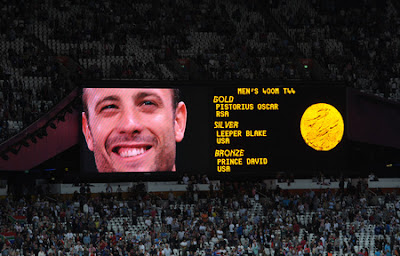 'The beauty of life is that you're always learning. It's easy to be gracious when you win but to be humble when you lose is not easy and I've had to learn that'
On Valentines Day 14th February 2013 was charged with murdering his girlfriend.
credits reuters & richard whitehead facebook & the independant & bt & the guardian & time & Oakley & Ossur & nike & new york times & associated press
posted by pippa ponton & jphibbs
Posted by astrology wheel at 12:39