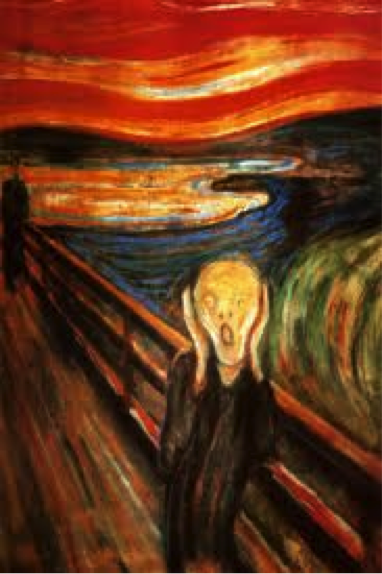 Munch may be physically dead but his work lives on. One reason his painting succeeds is because it represents our continual and very human angst. It can highlight and sum up our present day stresses and anxieties very graphically. For example, the worlds current relationship with money. In yet another phase of human existence, when one country is impoverished and bankrupt -  the sale of one man's painting for money counted in the millions - whilst for millions of people all over the world money is in short supply.
On May 2nd 2012 Edvard Munch's painting ‘The Scream’ sold at Sotheby’s for £74 million. The money will apparently fund a new museum, art centre and hotel in Norway, Munch's homeland. 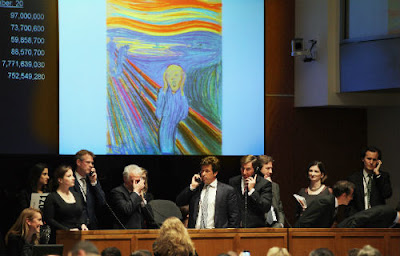 It is not only the physical marks he laid down on canvas that survive, his name, his influence, and his legacy are still with us.

His birth chart also remains and his birth wheel keeps on turning.
If we look at his birth chart and interpret it as if he were sitting down in front of us for an astrological consultation, we could see that he was experiencing his Saturn Return and a Saturn Return can often feel like a nightmare.
Saturn Returns can be healthy, healing, educational, amazing even (“look Edvard your painting just sold for 124 million dollars”), but that being said they can often FEEL LIKE A NIGHTMARE. A Saturn Return is an intense time of self-questioning, self adjustment and taking stock. It’s a reality check, and signing cheques can get you what you want - but can also hurt! 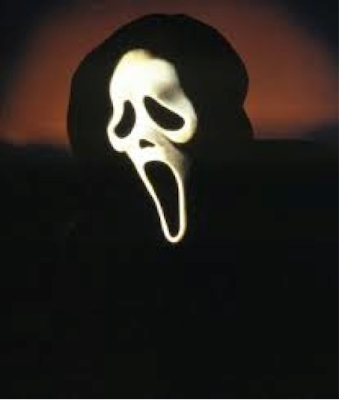 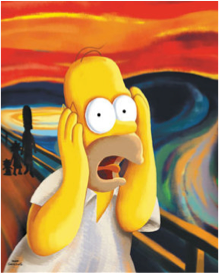 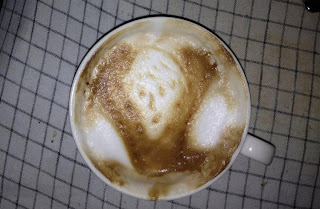 Norwegian artist Edvard Munch’s birthday is 12th December, which places his Sun in the middle of that part of the zodiac designated to the fire sign Sagittarius.
So he could have said "I am a Sagittarian', and read information about Sun Sign Sagittarius. He would have discovered that his basic nature was expansive, fun loving, happy go lucky and very upbeat – eh hang on a moment, looking at that painting The Scream, do we the viewer, for one second imagine that whoever painted it had those qualities? No probably not. So what is wrong, astrology, us, or something else? 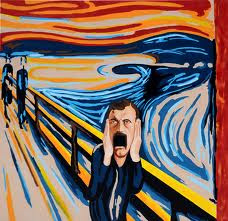 Well the answer probably lies in what we are not looking at directly. One, Edvard may well have said he felt himself to be optimistic and enthusiastic some of the time or maybe a lot of the time. Two, the Sun sign is only one part of a highly complex story. As well as the Sun, astrologers look at other planets, and these other planets also have signs. So, we all have a Moon sign, Venus Sign, Saturn sign etc. The Sun can symbolize and tell us about our essence, our basic nature, that part of ourselves we are struggling to become or grow into.
The Moon sign can be one of any of the 12 zodiac signs from Aries to Pisces depending on the time of birth, the same can be said for Venus, Mercury, Mars and the other planets. The Moon sign will symbolize or tell us about how we feel about things, what comforts us or how we mother ourselves.
So back to Edvard Munch, his Moon sign is in the sign of Capricorn, and astrologers find that the sign of Capricorn describes qualities quite foreign to what is described by the sign of Sagittarius (his Sun sign). Capricorn energy can be grumpy, depressive, prone to looking at the dark side, and acutely aware of the grand task ahead. Capricorn planets can put on a dark lens and look out at life with a bleak perspective. Grim in other words. To counter this, Capricorn planets have other qualities such as determination, stability and persistence. But there is an air of grimness around. And as for Munch he has this grimness as a Moon Sign so in other words how he feels and what comforts him is coloured by these Capricorn tones. For some people this may make no sense at all (you might have Moon in Sagittarius or Aquarius) you ask yourself how can a person comfort themselves by feeling grim – well they do, that’s who they are, just as they will wonder how a Moon in Sagittarius is comforted by being so naïve and refusing to face reality – where’s the comfort in that they may ask. Facing reality full on for them is safer than not. Facing reality squarely gives them the heads up.
One more thing – Edvards Venus and Mars Sign – they occupy the same part of the zodiac, and that part is symbolized by the scorpion - Scorpio (Mars in Scorpio - What Lies Beneath)
The Scream was also said to be a reaction to the eruption of Krakatoa on the 26th/27th August 1883 one of the most devastating events in history with those 'blood red skies' at twilight appearing in Norway that year. The explosion was equivalent of 200 megatons of TNT stronger than the atomic bomb dropped on Hiroshima and was heard thousands of kilometres away. An enormous Tsunami and earthquake followed and the moon turned blue for two years with the amount of dust and ash in the atmosphere.
'suddenly the sky turned blood red … I stood there shaking with fear and felt an endless scream passing through nature' Edvard Munch (Once In A Blue Moon)

Tate Modern in London has continued the interest in Edvard Munch with an exhibition from 28th June/14th october 2012 demonstrating Munch's fascination with new technologies and how much that has influenced his work and his ongoing influence.