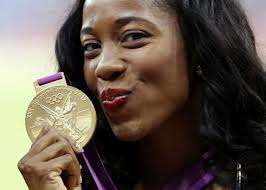 Known as the 'Pocket Rocket', Fraser-Pryce is the first Caribbean woman to win 100m Olympic gold medal, gained in the Beijing 2008 games as a virtual unknown. In London four years later in 2012 she didn’t disappoint, winning Gold again in the 100m sprint final and Silver in the 200m and 100m relay. She has laid claim to the title of ‘fastest woman on earth’. 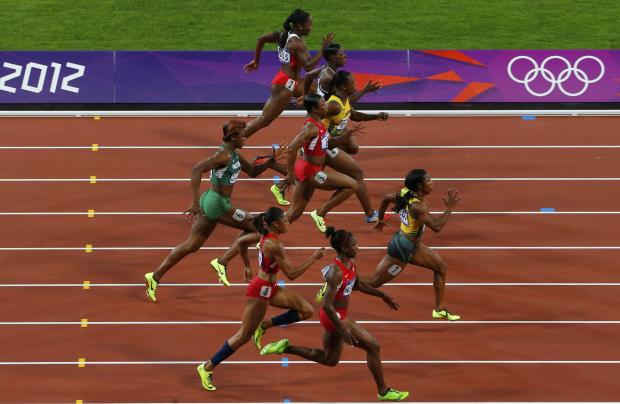 Running hasn’t always been easy for her, back in 2012 two years before the London games, she tested positive for a banned substance. She did not receive a ban, however, as she took the substance as part of treatment for a toothache but she was shaken and upset by the accusation.

In this Olympic Series, I have looked at a couple of athletes who have a ‘hard’ aspect between their Sun, sense of purpose and centre, and Neptune, in the form of an opposition (see Phelps & Lochte) and a square (see Chad de Clos). Fraser-Pryce has the conjunction between Sun and Neptune in the Earth sign of Capricorn, the ambitious mountain goat. Phelps and Le Clos are both swimmers. Shelly-Ann, however runs very definitely on terra firma, befitting her Earthly solar Capricorn.
Neptune, holding hands with the Sun has many benefits; people who have it in their natal chart are blessed with a high degree of imagination, sensitivity and visionary skill as well as bags of artistic and spiritual capacity. On the downside, however, it can bring a cloud of mystery, confusion and fuzziness, which hangs around their achievements and identity. Placed in the sign of Capricorn, it will appear just as they near the pinnacle, just as they are in touching distance of their goal, something strange and unexplainable lurks and then lurches out in what looks like something out of their conscious control - much like a cloud descending and obscuring who they really are and what they are really about. It can all get very misty and murky.  Solar Neptunian's can tap into deep reserves of compassion, empathy and understanding. They can make the simple complex, and the complex simple. In Shelly-Ann’s case this Sun Neptune conjunction receives a helping hand, a sextile from Pluto which should enable her to surface from the depths with the treasure – and on August the 4th 2012 she did - and that treasure was gold!


One other aspect of note is that on the night of her gold medal race Mars was moving through the zodiac to form an exact conjunction with her Libra South Node. The Lunar Nodes form an axis, where one is the other's exact opposite, so for Shelly-Ann this meant her warrior ‘fight till I finish’ Aries North Node was also being triggered.
Lunar Nodes are a fascinating and revealing ‘spot’ in all our birth chart's.  Some people link them to past lives, whether literally, as in our early years, or clearly referencing reincarnation and lives lived before the current one. The nodes could elude to genetics and our inheritance or just clearly and directly, our family history.
The South Node shows where we have been, what talents and skills we have already developed. It can show us what is comfortable and known and arguably what behoves us to release in some measure but not completely. It is certainly where not to sit and rest  overly long. The North Node in contrast is the compass point that leads and guides us through into virgin, unknown and potentially challenging areas. It pushes us into areas we need to discover and then develop, hopefully in ways that help us to go forward in positive directions.
For Shelly-Ann Fraser-Pryce it could be argued that on the 4th August 2012, the eve of Jamaica's 50th Anniversary Independence Day, it was a night when she stepped into her destiny. A night that waited expectantly, and like a beacon, was beckoning and urging her forwards towards the goal. Mars the triggering warrior planet, symbolizing muscle power, drive and competition held hands exactly with her Libran South Node and so doing it rang a  bell. That bell resonated with that part of her which was expected to, and was used to, putting effort in for the sake of others, for instance in the relay team, as well as setting off the starting gun on her Aries North Node which pushed her to be the first past the finishing post 'for herself'. Kingston, Jamaica the place of her birth, the soil of her recent genetics – joined together with the London Olympic Stadium and the vast audience around the globe, to rejoice. 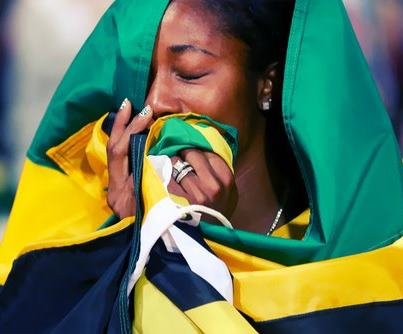 Here is the birth chart for independent Jamaica 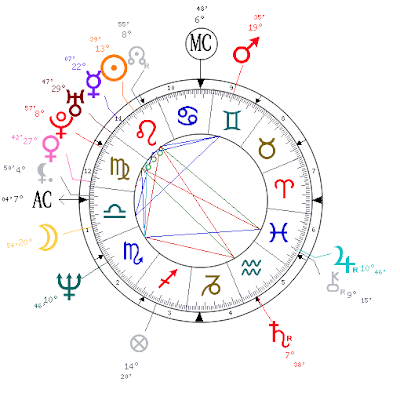 There is a sweet astrological tie-in: the Moon, which in Mundane astrology signifies 'the people' is at 20 degrees Libra, which is exactly on Shelley-Ann Nodal axis. Her South Node is 17 degrees Libra a perfect reflection of just how deeply connected Shelly-Ann is with Jamaica's past, present and future.

posted by pippa ponton & jphibbs
Posted by astrology wheel at 00:32