Let's visit the Aquatics centre at the Olympic Park again, the centre is one of the stars of the London Olympics in it's own right. It's architect, Zaha Hadid, described it as ' A concept inspired by the fluid geometry of water in motion' It's nickname is 'The Great Wave'.
From the great pool of amazing swimmers to grace the waters of Stratford we look to the southern wave from the Continent of Africa, we look towards 'golden boy' Chad le Clos and 'golden girl' Kirsty Coventry. 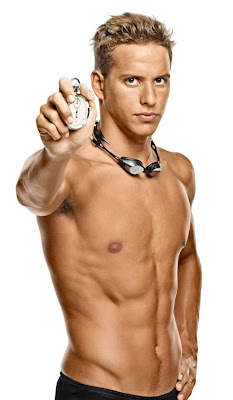 A rising swimming star, Chad was born 20 years ago and has been swimming for much of those 20 years. 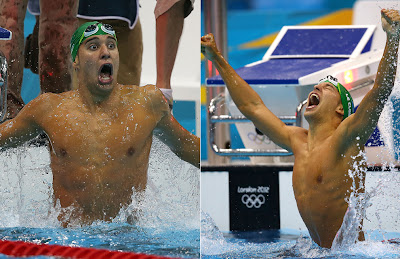 This Games he pipped, by a hair's breadth, his great hero Michael Phelps to the post in the 200m Butterfly, to claim his first Olympic Gold medal. Chad le Clos has become a celebrity. It was probably the most dramatic moment for South Africa at the London Olympics. Obviously, it was quite dramatic for Phelps as well, as he was hoping to be the first man to win the same event at three successive Olympics. It was hard to believe Phelps hadn't won, they were willing him on, but Chad won them over. There was a touching moment when the crowd in unison let out a loud 'Awww' as Le Clos was so moved he started sobbing through his national anthem. 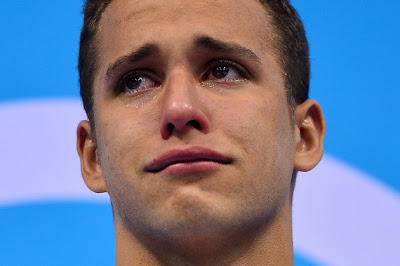 This heightened excitement was not only expressed by Chad. The brimming pleasure and pride of his father Bert knew no bounds it flowed freely and abundantly. One newspaper wrote: "If they awarded an Olympic medal for being the proudest parent, this man would without doubt win gold. 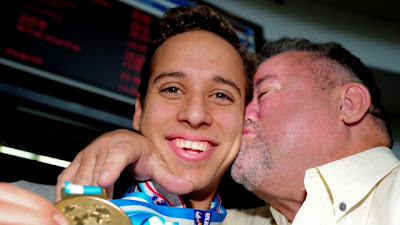 Bert le Clos was ectastic, to say the least, his joy was infectious and this next video made him one of the big stars of the London Olympics and a big topic of discussion for everyone Twitter where he was trending for a while.
Chad Le Clos, young, handsome and talented has one of his greatest fans in Princess Charlene of Monaco, setting off some odd rumour mills, of course. Charlene, a friend of the Le Clos family has herself competed for South Africa, she swam in the 2000 Sydney Olympics placing 5th in the 4x100 metre medley. Princess Charlene could not contain her joy as she watched his performance. 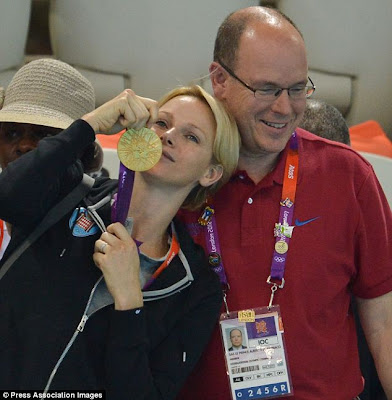 Lets have a look at his chart:

Sun and Venus Sign Aries will inject him with plenty of will to win and competitive spirit. As shown in Hiraksu Hakya chart, Aries is a sign associated with drive, pioneering, being the first, and striking out ahead of the pack. Le Clos also has his Sun Ruler, Mars, in the sign of the fishes, Pisces. A warrior in the water. Let's focus on a few aspects:
Sun square Uranus and Neptune: The Sun, our will power, our centre, our life purpose is impacted in challenging ways by Uranus, the somewhat wayward, maverick and 'topsy turvy' planet. Not only are the odd effects of Uranus at play but also Neptune, Lord of the Waters. Bil Tierney says the Sun “always wants to come up a gold-medal winner in life” and so it is not really a surprise to see the 'surprising winner' of the race has his gold-medal performance put around his neck by both the planet of surprise and the planet of water. This combination is also urging him on, biting at his heels, pressing and applying pressure to be unique and yet also perform ‘for the collective’ to do something that is 'his' but to which everyone can identify. 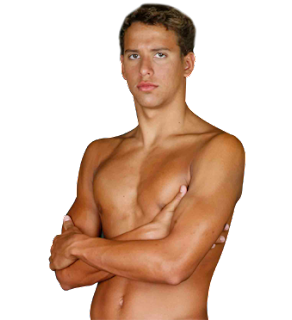 The Sun also tells us something about our father, the hero within and without, and with the Uranus show he needs a strong authority figure to rebel against and surpass. Combined with Neptune it illustrates his solar figure is not only his father, with whom he seems very close, but also the swimming star Michael Phelps, his hero. "I told myself I would tell [Phelps] he was my hero. So that's what I did." "I remember turning in the last 50 and just looking at him underwater and realising this is my hero, it's crazy". 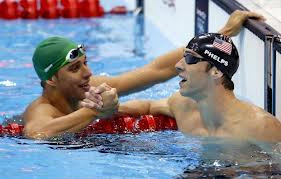 Neptune is the planet of glamour and hype and having it so prominently shows how he can easily attract the attention of the media as well as gossip hunters. People born with the Sun square Uranus will strike out and do their own thing whilst also desiring to be in the in-crowd, a difficult juggling act.
Chads aspect pattern of Sun, Uranus and Neptune, was, at the time of his gold medal swim, being ‘set-off’, triggered as it were, by Mars the planet of drive, push and explosive energy. Mars is the God of War and is totally up for any challenge, it positively live’s for it in fact. Mars activating this complex would be like injecting black coffee directly into the nervous system, straining and roaring at his sense of purpose, his destiny, to “Come on Chaaaaad!” As his Dad shouted over and over again.....Unbelievable! 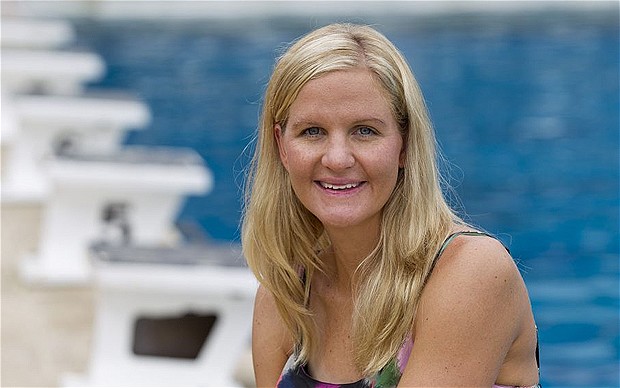 Born nearly 10 years before Chad Le Clos, by 2008 Kirsty had already won 7 Olympic medals including 2 Gold in swimming. In Beijing 2008 she broke the world record in the 200m backstroke, the second oldest record in women’s swimming. After Beijing she was dubbed “our national treasure” in Zimbabwe and her country loved her and took great pride in her achievements.  On her own she has more medals than her entire country has ever won. 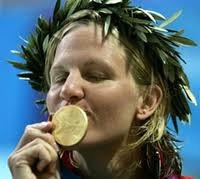 Robert Mugabe called her a “golden girl” and gave her $100,000, most of which she gave away to charity but some people were highly critical of her accepting at all. She is Sun Sign Virgo which thinks through everything in great detail, very little is casual or slapdash. The Virgo Sun would apply a lot of dedication for learning and perfecting her craft and of course, getting it right. Virgo does prefer to glide in under the radar but she also has Venus and Mars in the ‘golden’ sign of Leo, and that is always ready to radiate sunshine and bask in the light of some glory.

This year however, at the London Olympics, she did not win a medal and her highest result was 6th place. Before the backstroke race she thanked her supporters for pushing her in the semi final, tweeting 'I could hear drumming under water, it was getting louder. I knew right away that it was all of your shouting and support. Thank u'. Later for the finals her tweet read, '200 Backstroke finals at 7.30 London time. Come on Africa, I want to hear you roar'. You can actually hear the Leo in that tweet! She was beaten by U.S teen swimming sensation, Missy Franklin, who also broke Coventry's Olympic and World record in the 200 metre backstroke. Finally Kirsty announced that London 2012 would be her last Olympics.

A Newspaper quote, for example, read ‘The Zimbabwean’ says “her dream went up in smoke”. Dreams and smoke are both very Neptunian images and Kirsty Coventry has the same aspect as Chad Le Clos in her chart, a Sun square Neptune. Chad’s Sun-Neptune dream has only just begun but Kirsty Coventry's has sadly ended. 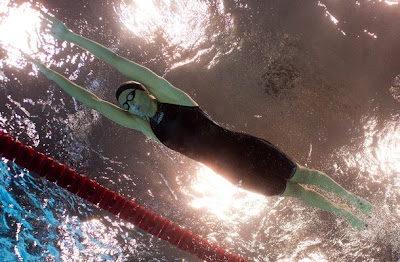 I have already described the Sun square Neptune but it is even more significant that for Chad Le Clos, this aspect was being activated by Mars the planet of War while Kristys’ was triggered by a very different planet – Venus, the planet of Peace. Does this signal a turning point for Kristy where she may prioritise Venusian pursuits such as love, diplomacy and appreciation of the sweetness of life, rather than just the battle of competition. Neptune on the Sun can be put to good use by pursuing Neptunian compassionate causes, but equally Neptune is the master of camouflage and linked with the Sun (authority, father or male figures) there is always the possibility that she could be swept away by powerful forces out of her control. 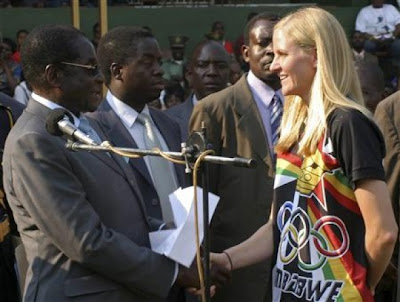 In her country she is an unlikely hero. Her country is in the middle of intense struggles. She herself had to cope with dislocated knee injury and the effects of a 10 day bout of pneumonia prior to the Games. Princess Charlene of Monaco has also shown her support for Kirsty. Kirsty had effectively retired for over a year with very little financial support and only two competitive races before the Games. A miracle was expected.
Here is her chart:

People walked miles to find a TV to watch her performances and babies are being named Kirsty and Coventry even more bizarrely some babies being named after her medals and her strokes. To them she is a Hero, to others she is a problematic enigma, at best and to some she is a self-deceiving political pawn. It must be hard for her not to drown under all that pressure in the water or to be swept away completely. 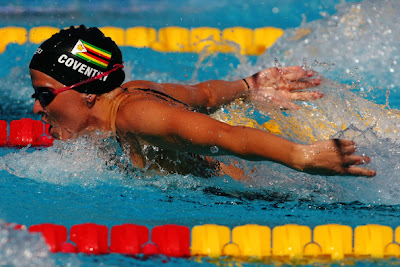 Kirstie Coventry living out the complexity of a Sun square Neptune and providing another unique Olympic story with a positive beginning and unfortunately a slightly sad ending.........
credits: francoise xavier marit,getty images
posted by pippa ponton & jphibbs
Posted by astrology wheel at 16:45