Once In A Blue Moon

This month on 31st August 2012 we will be under the influence of a Full Moon in watery Pisces. 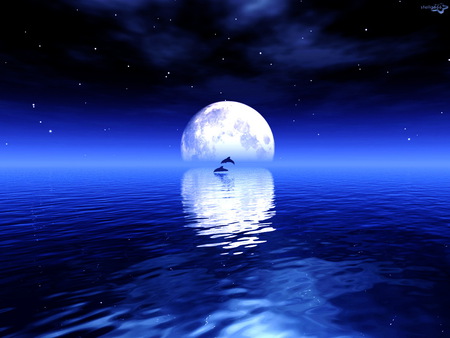 Pisces is one of the most ancient constellations in the sky but also one of the most difficult to see. The sign of Pisces is represented by two fish held together by a chain or ribbon. In legend they are the Goddess of Love, Aphrodite and Eros (the Roman Venus and Cupid) who had disguised themselves as fish to escape deadly Typhon, the father of all monsters. Venus and Cupid had tied themselves together so that they would not be separated from one another. 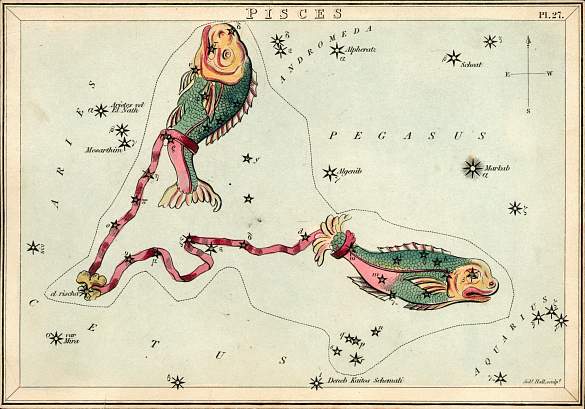 The last full moon was on 2nd August 2012 (Relax In The Full Moonshine) so this one will take the total to two full moons in one month, an unusual occurrence since there is usually only one a month. This second full moon is dubbed a ‘Blue Moon’. The phrase “once in a blue moon’ suggests that this is something out of the ordinary and unusual. 19th century London slang had it as 'a long time' phrase or an indefinite period 'I only do this once in a blue moon'.Traditionally a Blue Moon had referred to the 4th full moon in a season. The four seasons, three months each, have three full moons and the twelve moons all have names like the Harvest Moon. The extra thirteenth full moon comes around about every two or three years according to the ecclesiastical calendar. This the 'odd one' was christened 'Belewe' (Blue) Moon or betrayer moon. Some say the name may have come from the Farmers Almanac listing the date of the first full moon in red ink and the second in blue. Also, in March 1946 Sky & Telescope amateur astronomer James Pruett made an incorrect assumption with the two full moons in a month interpretation but now by any definition Blue Moons average out at every 2.7 years, sometimes more and the next one is in July 2015. 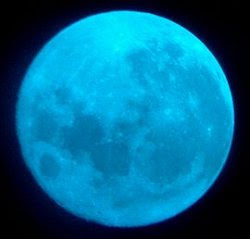 A calendar based Blue Moon occurs more frequently than suggested by the phrases such as 'never in a blue moon' or even '12th of never'. Yet geographically some parts of the World like New Zealand or Kamchatka near eastern Russia will not get a full moon until after midnight on Saturday 1st September and so technically will not get a Blue Moon at all this month.

An actual visible blue moon, or at least the appearance of one, is more rare and does not have to be a full moon. It can be caused by factors involving volcanic ash and forest fires throwing up a lot of debris and smoke and dust particles. The eruption of Krakatoa in 1883 when the island blew itself apart created blood-red skies as far away as Norway (Edvard Munch's Screaming Saturn Return) and caused a series of blue moons for two years. 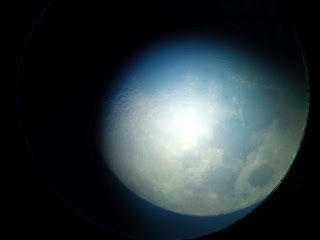 A Blue Moon may have an accompanying drama attached to it but how much astrological significance does it have in itself is debatable. Popular songs have used it as a symbol of loneliness or sadness, the expression 'feeling blue' means low in spirits and a bit maudlin. 'Blue Moon you saw me standing alone, without a dream in my heart...' This Blue Full Moon in Pisces will also have a story to tell.
(Frank Sinatra - Moon in Pisces)


Whenever the moon passes through the watery sign of Pisces, as it does each and every month, for those few days our senses are attuned to vibrations which do not necessarily manifest on the physical level. We see, hear, and feel information which is unseen, invisible and hard to grasp. We are more sensitive generally and question whatever is placed in front of us - somewhere inside we sense that ‘this is not all there is’. Endless possibilities of every option spread out in a vista in front of us, boundary less and infinite, throwing us into a whirlpool of wonder and wondering. 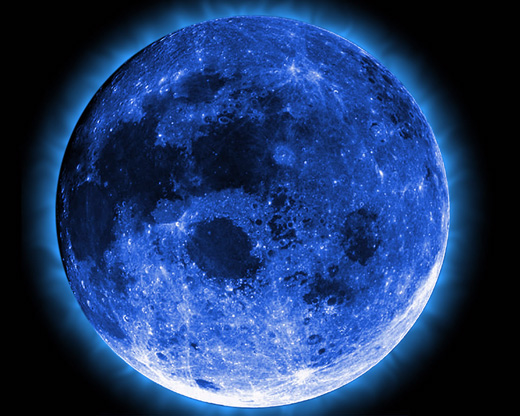 We ask of ourselves and others 'well what is the best course of action, where shall we/I steer this craft, has every stone been investigated?' One big judder. This juddering serves a purpose, and should not be dismissed as ‘flim-flam’ or ‘ditzyness’ or any such other derogotiary term. One thing it does serve is the ‘right hand side of the brain’, that part of us which is non-rational, non-linear, creative and intuitive. Those of you born with the Moon in this sign are probably used to being told you are ‘spacy’, oversensitive, a gentle petal, or wishy-washy, and you may well be at times, but this is not the whole picture. Other sides to Moon in Pisces includes a perceptive and wide ranging mentality, able to pierce the veil and see beyond where 'ordinary' folk stop looking. However, regular as clockwork the moon will meander down the Pisces path every month affecting us all to a greater or lesser extent depending upon our own unique and individual receiving station (our birth chart). The White House has had at least 20 years of Piscean energy in First Lady form.


Full Moons, blue or not, are always a time of gathering, of picking up the fruit and goodies which fall in our lap as a result of our efforts in the time between the last new moon two weeks previously. It is a time to gather our thoughts, digest the experiences which entered and pulsed through our lifes. On 31st August the Full Moon picks up rays and vibrations from quite a feast of planetary energy: Think of it like a shopping bag that you take home stuffed full of Pisces goodies since it has just held hands with Neptune in Pisces. Also in there is good stuff from Mars and Pluto, always good to have them on side. Also in there is a lesson from Uranus as the Moon has been semi-sextile Uranus in Aries. Nothing too undigestable or unpleasant hiding in there so far. It contains a lesson about how we can instigate changes and express ourselves more freely, but overall nothing too gut-wrenching on the surface, nonetheless it has been brought to our awareness. Just as we get home and start to unpack our bag and use all the goodies – 'ah yes I will pluck up the courage to ask my friend to finally repay that ‘loan’ I gave her that is well overdue' (trine Mars in Scorpio) or 'I will take up that job offer' (sextile Pluto or Capricorn), or 'I am going to book an appointment at the health spa' (conjunct Neptune in Pisces).

Maybe we should try and instigate some of those 'once in a Blue Moon' things we have just dreamed about perhaps they are not impossible but just appear impossible at the time. We are all capable of infinite invention and creativity.

In addition the Moon is holding hands with Chiron, the wounded healer, it will be conjunct in Pisces. Maybe the Moon is feeling a little blue after all. What essentially this means for us all is that we shall have a period in which to catch our breath and ponder upon what it is that we really want to ‘cure’ and heal in our lives. We may take a glimpse through the veil and wonder at all the new possibilities passing before our minds eye. For ‘whatever ails you’ there is always a cure close to hand, like a dock leaf growing near a stinging nettle, help may be nearer than you think. Perhaps a Blue Moon cocktail (gin, blue curacao and a twist of lemon) or simply a Blue Moon beer, a Blue Moon ice cream or sorbet, sit in a Blue Moon bar or hotel, watch Manchester City FC (quite popular this blue moon) or just watch the night sky and charge your batteries under the amplified lunar beams of blue.


posted by pippa ponton & jphibbs
Posted by astrology wheel at 14:49

Email ThisBlogThis!Share to TwitterShare to FacebookShare to Pinterest
Labels: moon