Disputed Waters In The China Seas

A swell of antipathy and discord is bubbling away in Asian waters, brewing and building the focus is on islands in the East China Sea, the very names of which are conflicted. To Japan they are Senkaku, China calls them Diaoyus and Taiwan and Korea are also in the melee, naming and claiming access to these waters. China's claims of sovereignity over nearly all of the South China Sea has dragged other ASEAN state members, Vietnam, the Philippines, Brunei and Malaysia into the political maelstrom and leaves the United States in an uncomfortable position.
Ships are definitely sailing into choppy waters around the Southeast Asian maritime commons.These islands geographically are around 25 degree north 123 degrees east, but politically they have been chopped and change ownership, governorship or stewardship.These 'disputed waters' for many years may have been changing metaphorical hands but potential disputes appear to have been left dormant and in fact avoided. Mao Tse Tung preferred to leave the matter undecided entrusting it for future generations to wrangle over. It now looks suspiciously like that wrangle time has finally come with the second Uranus/Pluto square. (Hot Spots & Lightning Rods - Uranus/Pluto 2nd Square).
Matters have accelerated with China referring to Japan's prime minister Yoshihiko Nodo as obstinate and quite frankly wrong for saying that Japan would not compromise. Anti-Japanese protests in China has become violent with the Japanese embassy vandalised and Japanese cars and businesses set on fire and destroyed. This old wound was opened by the Japanese government on September 11th 2012, buying the islands privately from a Japanese family, who had previously leased it. Reasons for this they stated, was in order to prevent Japanese nationalists radical plans for them.
Activists from China and Hong Kong sailed into the disputed islands, Japan swiftly arrested them. The South Korean president Mr. Lee took an unprecedented trip into the Kokdo Sea of Japan to which Japan took offense. Against Japan’s prime minister Yoshihiko Noda’s advice, two Japanese ministers visited a war shrine honouring their imperialist past. Mr Lee issued a statement asking the Japanese Emperor Akihito must apologise for war crimes and colonial rule otherwise he ‘need not come’ to South Korea. All these acts are stirring up patriotic and nationalist fever on all sides, a fervour which has been fertilized by decades of misinformation, skewed education of actual history and simmering unresolved wounds. Flags are unfurling, chains are rattling, banners are waving and trenches are being dug. Riots in China, protests in Taiwan and fervent rhetoric in all the countries involved has continued. One Chinese newspaper actually suggested the solution be that China use the atom bomb on Japan. Japanese citizens suggest that China's claim to the islands is only recent and plainly economic. America maintains its neutrality but on a recent visit to Asia, Leon Panetta, the U.S defense secretary reiterated his countries pledge of ‘mutual defense with Japan’ which underlines that any attack on these islands will include American involvement. The US future plans also includes a move of at least 60 percent of its navy to the Asian/Pacific area.
It has been argued that this sabre rattling between the Asian heavy weights, China and Japan, is toothless and a storm in a teacup, brewed and stewed, served to divert and diffuse from more obvious ‘home’ troubles. Both nations have political systems which are in a critical changeover period. China has it’s crucial party elections in December and the Japanese government is on brink of defeat. The economic imperatives may help to stay the wobbly hand, the trade and financial benefits accruing from these countries mutual agreements should act as an encouragement to détente and a further deterrent to war. The islands in dispute consist of five uninhabited islets and three barren rocks, 7 square kilometres, 120 nautical miles from Taiwan, 200 nautical miles from mainland China and 200 nautical miles from Okinawa, Japan. 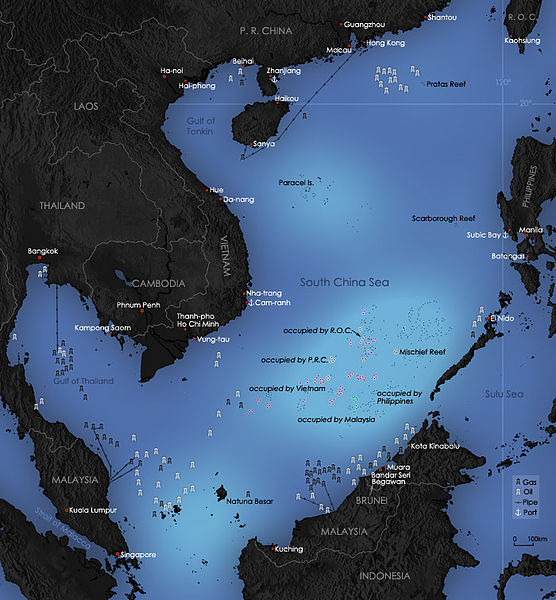 What about the astrological climate and where are the water signs? Contested waters, boundaries and avoidance all speak of the signs of Cancer, Scorpio and Pisces and the planets, Mars, Saturn, Neptune are probably involved.
Mars, the god of war, always ready to defend, thirsting for a head to head contest and spoiling for fight, is in the water sign of Scorpio (Mars in Scorpio What Lies Beneath). In early October, Mars will move into the sign of Sagittarius, which can be prone exaggeration, taking the moral high ground and broadcasting its political views very loudly indeed. This is acting with, not only high moral but fertile ground for the shouting of slogans, the hyperbole of religion fervour or political flag-waving and galloping over  previous border demarcations. 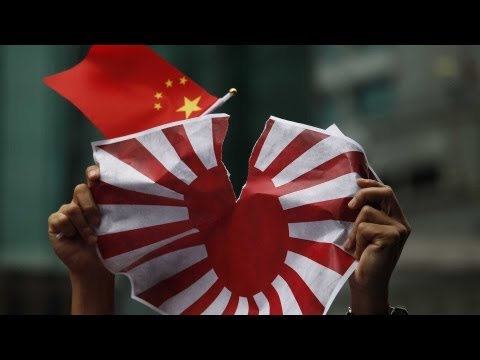 Sagittarius is a fire sign, the mythical Centaur, half-man/half-horse and loves to range and roam and explore and push boundaries. In this heated political context, however all of those qualities and traits may be highly inflammatory. As it is Sagittarius, lets go with the positive side, it can often be all about the roar and race with a little less vicious bite. Fire signs can all stand on their hind legs or in this case, high horse and point indignant fingers but a clear voice of cool reason, an emotional appeal or solid tangible beneficial result can immediate bring about a sharp U-turn. We are involved with a Mutable fire sign here as well, burning bright and of some real use when there is a purpose to gallop towards.
Neptune, God of the high seas, is in the critical degrees 28/29 Aquarius the water bearer, and 0-1 of its own water sign, Pisces. These degrees the ‘anaretic’ degrees, are considered wobbly and unstable, times when matters connected to the symbolism of the sign can get way out of control, we suffer the deluge and we are awash with it. The last time Neptune surged through these degrees was the tragic and horrific Japanese tsunami of 2011. Then the water moved in suddenly overwhelming huge swathes of the Japanese coastline. 18,000 people died in that disaster, many more people were left homeless and a Japan as a nation rocked back on its heels with about £145 billion to repair the damage.
Saturn, the God of restrictions and boundaries is in the critical degree of Libra and more importantly is also about to shift into the water sign of Scorpio on 6th October 2012. Saturn moving signs happens every two and a half years and is deeply significant whenever it happens. This time the move is out of the diplomatic and charming sign of Libra, now breaking up due to the anaretic degrees it occupies, and into the more strident sign of Scorpio with a lot more deep feelings beneath the surface, past hurts remembered and not forgiven until they are resolved. Minister Lee Hong-yuan brought up a old war wound just recently, the sore and sensitive subject of ‘comfort women’. These were Korean women herded up and forced to have sex with the Japanese military in WW2. Saturn has been called the planet of karma, what goes around comes around and reap as ye sow, a sure sign that issues concerning old seeping wounds and self-respect will be immediately placed on any conference table. As Saturn enters Scorpio it is in mutual reception to Pluto,(signs that play host to each others ruling planet) which continues to battle out its squares with Uranus in Aries. Saturn entering Scorpio is going to get highly involved and will be making its presence felt, hopefully as a constraint and limiting stricture for the darker face of Pluto in Capricorn controls. 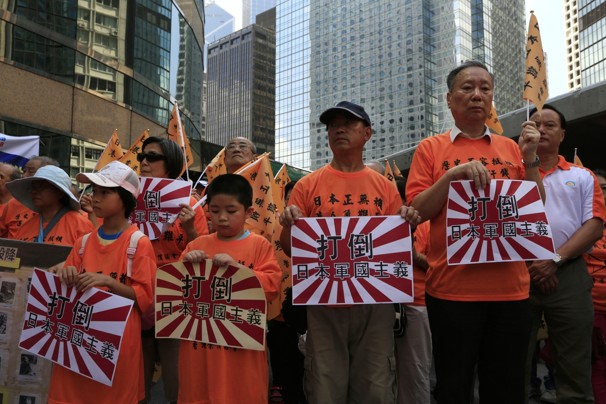 On top of this activity is the massive backdrop painted in the colours of revolution, rebellion, crackdown, control and out-and-out tension of the Uranus-Pluto square (Uranus vs Pluto). This square is volatile already and triggered by the full moon on 29th September 2012 and hanging over our heads like the sword of Damocles. Small infractions and minor misdemeanours are suddenly nervous making flash-points that can potentially escalate into a full blown heave-ho's and outright conflicts.
Hopefully, these Disputed Waters will becalm and be resolved diplomatically with the best arrangement being that the islands and their waters become a peaceful designated wildlife sanctuary, a most welcome and needy addition to global biodiversity. The fact is these tiny, uninhabited island are not really the prime targets, the rich fishing grounds, large reserves of natural gas and control of key shipping lanes vital to global trade are in hard facts the real bounty. Taiwan is apparently 'pushing ahead' to set up a national marine park, 140 kilometres west of the disputed islands, it currently holds three islets, Pengjia, Mianhua and Huaping and surrounding waters measuring about 750 kilometres. China, while apparently running fast and furiously into the future and a greater international status still appears to adhere to its glorious 'imperial age' style of foreign policy with 'loss of face' statements and falling foul of 'barbarianism'. Japanese exports to China are in the balance with about £216 billion of trade in jeopardy at a time when the Japan's economy really need it and a national election approaching and China wanting to hit the Japanese economy hard.
Saturn in Scorpio is good at

Posted by astrology wheel at 23:35

Email ThisBlogThis!Share to TwitterShare to FacebookShare to Pinterest
Labels: Saturn