Last Transit Of Venus This Century 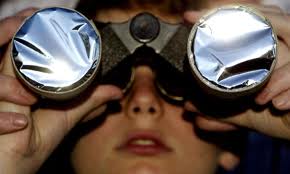 Once in a while Venus, the planet of Desire, moves in front of the Sun so that here on Earth we get to see the event. Astronomers are very excited about this Transit of Venus because it is the last one of this century. The best dates for viewing were given as 5th and 6th of June depending on where you were going to view from. The transit started yesterday visible from Alaska, parts of northern Canada. most of Australia, New Zealand, Asia and Russia. As the sun sets on June 5th the transit views progressed into the US then into East Africa, Europe and Scandinavia as the sun rises on June 6th. Most of South America and the west of Africa will not see it at all and the final transit hour just before 5am BST it will be visible in the UK....if the skies are clear enough please! This will be our only chance to witness this event because it will not happen again until December 2117 that is 105.5 years from now!
This is such an unusual ‘event’ that the BBC is showing a special documentary programme about it - ‘The Transit of Venus: A Horizon Special’
What is the astrological significance for us whether we actually ‘view’ this transit or not? I am writing this on the final day of celebrations for the Queens Diamond Jubilee here in the U.K. where millions of people are focusing their attention on a special women (Venus) who they love and admire even though they have never, or only fleetingly, met her. A woman whose face they know and recognize as easily as any family member. For the majority of the four day celebrations there was the constant presence of her consort, the Duke of Edinburgh. It was only on the final day due to ill health that she appeared without him, a rare sighting indeed on so public an occasion. Just as with the Venus Transit, the Queen has been singled out and made totally visible.

Astrologically the Transit across the Sun occurs in 15 degrees of Gemini, no surprise then that the Duke of Edinburgh's Sun in his birth chart is at 19 degrees of Gemini, and the Queens Venus itself is 13 degrees of Pisces which is exactly square the action consequently taking a large part in the action. Not only this but the Lunar Eclipse that occurred on Monday in the middle of the celebrations and when the Duke first became ill occurred on these sensitive degrees, at 14 degrees Gemini.

This goes to illustrate that when degrees in a birth chart are sensitized, i.e hit by celestial traffic such as an Eclipse or Venus Transit, events seem to conspire to mirror or reveal things about the person or event which can be highly illuminating, and sometimes strangely accurate. We just have to look and find these links.

On a personal level, this Venus Transit may drag you much deeper into the areas symbolized by Venus, such as Beauty, Love, Desire, Relationships, and Harmony. These Transits come in pairs and this is the second one. Cast your mind back to the time of 8th June 2004, the first of this pair, and think of what you were involved in or setting in motion. What was happening for you back then? There may well be traces and whispers today which speak of that time. And the Queen, what was she up that day? Well it was announced on that day that she will open the Princess of Wales, Diana Memorial Fountain.

There is much anticipation in the astrological world that this will herald a time of greater goodness and reconciliations. I do hope so and will be literally wishing on a star tomorrow at about 4 to 5am. A few words from Adele who is Venus in Gemini.

Posted by astrology wheel at 02:46

Email ThisBlogThis!Share to TwitterShare to FacebookShare to Pinterest
Labels: venus