The XXX Olympics began on 27th July 2012 in London with a Opening Ceremony orchestrated by the film director Danny Boyle and a potential world wide audience of over 2 billion. Boyle is the Oscar winning Director of films like Slumdog Millionaire, Sunshine, Shallow Grave and Trainspotting. The ceremony, called 'Isles of Wonder' had references from Calibans speech in Shakespeare's play The Tempest "a thousand jangling instruments, sounds and sweet airs and clouds that open and show riches"
As Artistic Director, the position of Boyle's Venus seems a likely place to look in order to give us some insight into the artistic content and value of the opening ceremony. Due to the fact that Danny Boyle's birth time is unknown, there will be much we can't know, such as the exact position of his Moon and the house placement of the planets, however there is still plenty to interest us astrologically. Lets try focusing on Venus alone:

Venus in Virgo: Venus values the arts but just its sign placement in any chart can also reveal the nature of our personal styles and what we value.

The 2012 London Olympic Opening Ceremony actually set off, not with a bang but with a gentle pastoral scene. The stadium was full of real soil, grass, a mini Glastonbury hill with its sacred thorn tree, live animals and agrarian folk seemingly going about their daily rituals and duties. This parochial scene appeared oblivious to the fact that it had been transported into a giant stadium, in front of millions and already rehearsed to exhaustion or indeed to precision, probably 'trending' on Twitter, transmitted via satellites and was suddenly a truly Global Village.
Danny Boyle's Venus is aptly in the earth sign of Virgo. A Virgo Venus really yearns for perfection and it naturally wants to simplify, sort and sift. Virgo also wants to find and keep its integrity and to maintain and keep its core values pure. This opening ceremony was intended to create these simple, easy to take on messages in various spectacular forms. The complications of life, as in the ceremony, are like the strings and wires and cogs and chains, generally hidden, invisible or cleverly disguised.

Boyle communicated his Virgoan vision on the night of 27th July 2012 on a massive global stage watched and potentially critiqued by billions of people. Then Olympic and world-wide honours went to Tim Berners-Lee creator of the The World Wide Web. In real time Berners-Lee then tweeted his donation to the world with the words 'This is for everyone'. The message also flashed around the stadium, with the letters being made up of handheld 'pixel paddles' with 70,500 audience members involved. 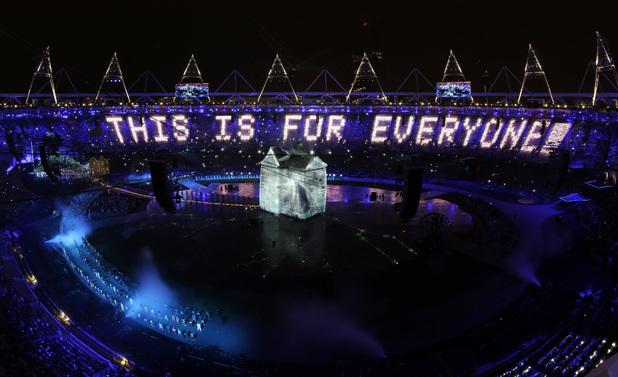 He suggested 'the ceremony is an attempt to capture a picture of ourselves as a nation and will celebrate the exuberant creativity of the British', its open, daring nature and the inventions and technologies that has changed ordinary lives world wide.
Virgo values also include modesty and Boyle is quoted as proclaiming “there has to be a modesty, you can't get grandiose with this job because you are following Beijing”. China poured in $40 billion while Boyle's budget, was cut back. This Opening Ceremony relied on the efforts, skills and co-operation of 15,000 volunteers and in turn Boyle dedicated the show to them 'What you think about really is you think about the volunteers. The thing about directors is that they just sit at the back in the end. This is a live performance'
People born with Venus in Virgo are seduced by the whole ideal of perfection, simplification and applying make-up and costume to cover up the internal integrity and to keep it intact. The flashier the outside heartfelt message the more the will to leave the heart's inner chambers alone!
Venus at 16 degrees Virgo: Describing 16 degrees Virgo in his book 'Degrees of the Zodiac Magnified' Mohan Koparkar says, 'childhood has a lot of esoteric and philosophical teachings....this degree has some complexities in the areas of romance, creativity and children'
These inner complexities present in Danny Boyle's Venus degree were externalised and projected on giant screens on a world scale. His obvious delight in children's literature and his loving honouring of children was an integral part of the ceremony, with J K Rowling reading from 'Peter Pan' to the Child-catcher from 'Chitty Chitty Bang Bang' but we feared not as a shower of Mary Poppins appeared.
Venus opposition Mars: After the audience was lulled into a dream of a simple worthy working life, the scene was interrupted by the arrival of the Industrial revolution. Chimney stacks piercing up through the earth, erupting from the depths evoked a time when the ordinary peasant folk, man, woman and child was driven out from rural life into the industrial towns and cities.
Astrologically Mars in Boyles chart is in Pisces and opposes his Virgo Venus. The Martian Piscean element drags us towards looking at the suffering and showing compassion for the sick and valuing those that heal them. A long sequence flagged National Health Service and showed it to be a heroic statement of care and compassion and something to be proud of and cherished.
This was followed by another statement about the world renowned children’s hospital, Great Ormond Street, London, echoing Boyd's 16 degree Venus position and its need to connect with children.
As well as looking after the ‘little people’ we must never forget the collective. People with Venus in opposition to Mars can never really rest with ‘what they have’ there is always an itch which needs a scratch, a score to settle and a point to prove.
Danny Boyle's Mars also lies on the fixed star Achernar which is said to bring ‘Royal honours’ and the day after the ceremony the British public were clamouring to make Boyle a ‘Sir’ an honour granted by the Queen, who also featured heavily in the Ceremony in this her Jubilee year.

Venus square Vesta: The asteroid Vesta is the holder of the flame. In keeping with Vesta's connection to Venus the Olympic flame is lit by 204 copper rose petals. Copper is the metal of Venus and the rose is the flower of Venus. People born with Venus square Vesta keep a flame lit and make sacrifices for everything their Venus sign values and holds sacred. It may be a challenge and stressful at times but they wont let go of the rope. In Boyles case Venus in Virgo meant he gripped hard onto values such as purity, integrity, service, humility and modesty.
Venus conjunct Jupiter: There was much fun and over-the-top ebullience, not least with the arrival of actor Daniel Craig, in character, as James Bond with Her Majesty the Queen apparently (not in character but herself), greeting Mr Bond in Buckingham Palace, and was then seen jumping out of a helicopter and parachuting into the stadium (a stunt double). As always the Queen gave a very professional performance and did it all in one take. Was she playing a new regal 'Bond Girl' or did she see herself as more Judi Dench, playing Stella Rimington, the real-life head of M15, in the Bond films, as the big boss M - standing for for M'am or Majesty, on this occasion... ha!
Rowan Atkinson in his Mr Bean personae joined with conductor Simon Rattle for a one note performance of 'Chariots of Fire', providing comedic value in a really classical setting.

Many people with Venus conjunct Jupiter can go over the top with their pleasures and sense of fun. The more people who join in with them the merrier!

On the day of the Opening Ceremony Venus was in 21 degrees of Gemini which activates Boyle's own Venus/Jupiter conjunction by squaring it....and a lot of people did join in with him and were merrier.This was a massive party and the whole globe was invited.......

'Come Together' a plea by another Venus in Virgo, John Lennon with Mars in Libra.
credits: EMMANUEL DUNAND/AFP/GettyImages &
posted by pippa ponton & jphibbs
Posted by astrology wheel at 21:54

Email ThisBlogThis!Share to TwitterShare to FacebookShare to Pinterest
Labels: venus